Chevy engine casting numbers are located on the back of the block most often on the left (drivers side) on top of the bell housing flange (see picture below). Chevrolet casting numbers can be difficult to read if the engine is still in the vehicle but it can be done. For the hard to read casting numbers try using a mirror and be sure to protect your paint. That means no belt buckles or keys or anything like that which can scratch your paint. Also if the engine is extremely greasy or dirty you should try cleaning the casting number to get a better reading. We have found that a small wire brush about the size of a tooth brush (or even a firm tooth brush if that's all you have) is great to use in cleaning off the casting number. If you don't clean the casting number then already hard to read numbers like "8", "3" and "6" (which all can look alike) will become impossible to determine what they really are. Couple other things to remember about casting numbers. There are no letters in the casting number so even though a number "1" may look like the letter "I" it is still a number "1". Same holds for the number "0" is not the letter "O". Also later blocks can have the size of the engine listed in liters at this location. 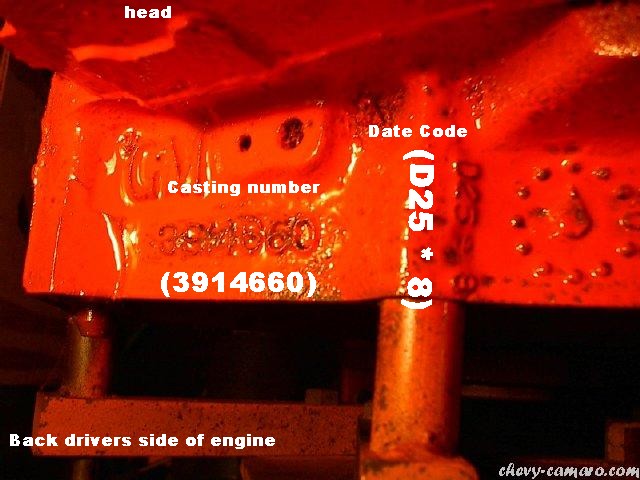 Date code decodes as letter for month, day of month and last digit of year. Month code A=Jan, B=Feb, ... to L=Dec. Example: D 25 8 decodes as April, 25th 1968. Some blocks may also have the block date codes listed on the passenger side of the block. If you have an early big block or a late model small block, then the block casting date may be located on the passenger side of the engine block instead of the rear ledge of the block.

back to Chevy Engine Codes