Q. Is there another place on my first gen Camaro that shows the VIN? or - Where are the alternate partial VIN locations on my first gen Camaro? This is unfortunately a very popular question. Word of warning: If something doesn't match up with the information on this site and other Chevy Camaro sites out there then stay away from buying the car.

A. There are two places on a first gen Camaro that has a partial body VIN but there is no alternate place that has the complete VIN stamped. The only thing that you will be unable to verify is whether the Chevy Camaro was originally a V8 or a 6 cylinder since the model number is not stamped anywhere else. Don't go by the trim tag as that did NOT change for 6 cylinders. The following is a description of where to find a partial body VIN on all first gen Camaros:

1. The easiest to get to partial body VIN would have to be the one underneath the cowl vent panel on the passenger side of the car. See picture below for what it looks like. This partial VIN can sometimes be seen through the slots in the vent panel. However you will probably have to remove the panel which is easily done by removing a few screws and the wiper arms which pop off. Word of warning some do come off easier than others though. Also depending on the body work the paint can very easily be chipped if you are not careful.

2. The other location is on the firewall either below the fan motor opening for non A/C equipped Camaros or below the heater opening if the Camaro was originally equipped with A/C. You will have to removed the heater box or A/C box in the engine compartment to view this partial VIN. If you happen to have a good picture of either of these partial VIN locations please send them to me. 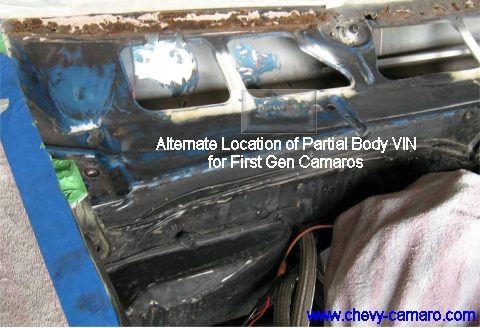 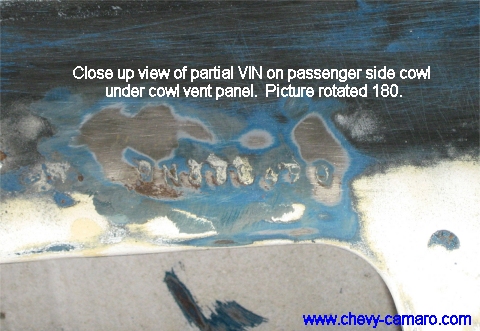